You are here: Home / Argue with the Umps / Blog 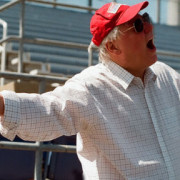 The Chuck Tanner Baseball Manager of the Year Award

“I don’t think a manager should be judged by whether he wins the pennant, but by whether he gets the most out of the twenty-five men he’s been given.”

Even before he came to Pittsburgh from Oakland in 1977, and throughout his 17 full seasons of managing Major League Baseball, Chuck Tanner was known for his unwavering confidence and infectious optimism.

Having guided the Pirates to a World Series win over the Orioles in 1979, after having fallen behind three games to one, is a testament to his patience, his aggressiveness and his innovation. Sparky Anderson once said of Tanner, “They do everything with abandon, because that’s the way Chuck Tanner wants it. He’s an aggressive manager, a manager who doesn’t go by the book.”

These leadership qualities and others are embodied in the annual Chuck Tanner Baseball Manger of the Year Awards, which include both Major League and collegiate managers.

Take a look at past MLB winners:

The committee also has included former MLB players and sports journalists, like Hal Bodley (MLB.com), Murray Chass (The New York Times, Associated Press) and former Pirates broadcaster Lanny Frattare. Selections are based on the quality of current season and total career and are made within a week of the final regular season game.

In addition, the Chuck Tanner awards honors the collegiate baseball manager of the year, along with professional players who perform non-profit community service, making this a truly national representation of baseball’s future legacy.

Planned and hosted by the Pittsburgh Rotary, all funds raised during the event are used to assist worldwide efforts in polio inoculation, as well as annual high school ethics symposia and post-high school scholarships.

The event includes a live auction and nationally recognized celebrity sports artist Kevin-John, who creates a special limited edition print given to everyone in attendance. Kevin-John will be present to personally sign his creation, and his artwork has been showcased on ESPN, Spike TV, NBC and at three Super Bowls, as well as the PGA Tour.

Held in downtown Pittsburgh, any serious baseball fan from any American city where baseball is played should book their flights now for Saturday, November 16, 2013.

Stay tuned to this space for more details, but for more info now, visit: Chuck Tanner Baseball Manager of the Year Award.