You are here: Home / Argue with the Umps / Blog
✎ 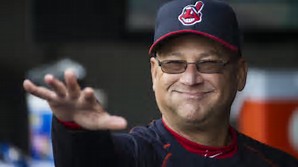 Terry Francona, the Chuck Tanner MLB Manager of the Year, 2017

Terrence Jon Francona, nicknamed “Tito,” has been the manager of the Cleveland Indians since 2013, and by his fourth season there, he led them to an American League pennant and to the 2016 World Series.

Francona grew up in New Brighton, PA, and he attended the University of Arizona, where he played for the Wildcats who won the 1980 College World Series. Francona was named the tournament’s Most Outstanding Player, and he won the 1980 Golden Spikes Award. The previous year, he represented the United States at the 1979 Pan American Games.

Francona was drafted in the first round in 1980 by the Montreal Expos. After briefly playing in the minor leagues, Francona made his major league debut as an outfielder with Montreal in 1981. As the seasons went by, Francona shifted to first base, where he ultimately played 100 games more than he had in the outfield.

After the Expos, Francona went on to play for the Chicago Cubs, the Cincinnati Reds, the Cleveland Indians and the Milwaukee Brewers. In 10 seasons and 708 games, he posted a .274 career average, with 16 home runs and 143 RBIs. He also made an appearance as a pitcher with Milwaukee in 1989, throwing 12 pitches and striking out one batter on three pitches.

After retiring as a player, Francona began coaching, spending several years in the Chicago White Sox organization. He managed the Sarasota White Sox, the South Bend White Sox and the Birmingham Barons, where he won three distinctions: Southern League Manager of the Year and Baseball America‘s Minor League Manager of the Year in 1993 and Top Managerial Candidate by Baseball America in 1994. He managed in the Dominican Winter League and won the championship and the Serie del Caribe in 1995–96.

Francona became third-base coach for the Detroit Tigers in 1996. After the season ended, he was hired as manager of the Phillies, and he spent the following season as a special assistant to the general manager with the Cleveland Indians, which was followed by two one-year terms as a bench coach for the Texas Rangers in 2002 and Oakland Athletics in 2003.

The Red Sox hired Francona to manage their club in 2004. Francona led the Red Sox to a 98–64 record that year, the second-best record in the American League behind their biggest rival, the New York Yankees. The club rallied in the second half and won more games than any other team in the American League after the All-Star break. As the American League wild card, the Red Sox swept the AL West champion Anaheim Angels, three games to none, in the division series. In the 2004 American League Championship Series, the Red Sox fell behind the Yankees, three games to none, including a 19–8 loss in game three at home in Fenway Park. However, the club regained its composure and won the last four games of the series, the first time in Major League Baseball history that a team rallied from an 0–3 deficit to win a playoff series. The Red Sox were only the third team to even make it as far as game six, and the only team to even force a game seven after trailing a series three games to zero. The Red Sox swept the St. Louis Cardinals 4–0 in the 2004 World Series. The long-awaited victory ended 86 years of frustration for Red Sox fans.

Two years later, the Sox won the AL East Division, finishing two games ahead of the Yankees. Under Francona’s leadership, the Sox swept the Angels in the division series before dropping three of the first four games to the Cleveland Indians in the ALCS. The Sox, facing elimination, went on to win their next three games, defeating Cleveland to advance to the 2007 World Series, where they swept the Colorado Rockies in four games. Terry Francona is the only manager in Major League history to win his first eight consecutive World Series games and just the second manager to guide two Red Sox clubs to World Series titles.

Francona came to Cleveland in 2012, and under him, the Indians finished the 2013 regular season with a record of 92-70, which was a 24-game improvement over the previous year. In 2013, Francona was named as the American League Manager of the Year, and he has led Cleveland to a 177-147 record since then.

He managed the Indians to the American League Central Division title in 2016. His team swept his former club, the Boston Red Sox, in three games in the divisional series, clinching a berth in the ALCS with a win at Fenway Park. In October of 2016, Francona’s Indians beat the Toronto Blue Jays to move on to the World Series. That year, Francona was named American League Manager of the Year for the second time in his career.

Cleveland turned in another successful season in 2017. The highlight was a 22-game win streak of historic proportions. The streak placed second in American League history and the longest without ties in MLB history.

Terry Francona is the Chuck Tanner MLB Manager of the Year for 2017.

The awards presentation takes place each year at a banquet in November in downtown Pittsburgh. This charitable event and its silent auction of sports memorabilia and other items is used to support Pittsburgh Rotary Club charitable programs, including global humanitarian relief, such as polio inoculation and shoes for Nicaraguan children, as well as post-high school scholarships and an annual high school ethics symposium, which is attended annually by more than 400 students.

KeepScore Baseball/Softball Scorebooks is a contributor on the Chuck Tanner Banquet committee.